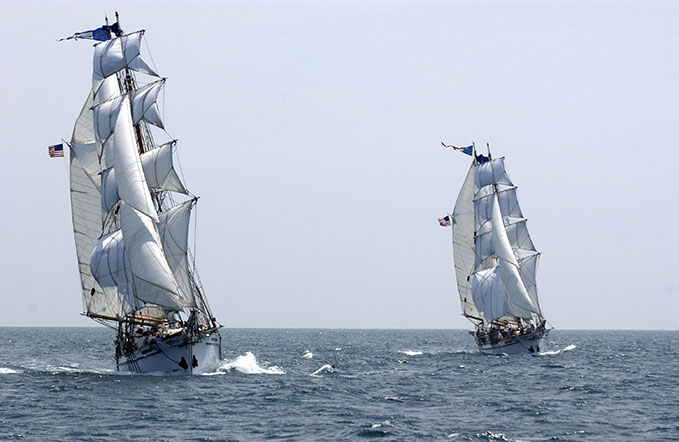 Designated the “Official Tall Ships and Maritime Ambassadors of the City of Los Angeles” at their launch in 2002, these 110-foot wooden vessels are charged with giving tens of thousands of young people the opportunity to experience self-discovery, life changing adventure and education found only on a tall ship at sea.

Built to last 100 years, the state-of-the-art brigantine design is based on TopSail founder Jim Gladson’s decades of experience with adolescent education and youth sail training programs, years of valuable experience gained from the Institute’s first vessel, Swift of Ipswich, and discussions with sail training experts throughout the world.

Purpose-built by the Institute to meet or exceed all U.S. Coast Guard requirements, the brigantines are named in honor of the late Captain Irving and Electa “Exy” Johnson, character-building sail training pioneers and seven-time circumnavigators with youth crew aboard their sailing vessel Yankee. 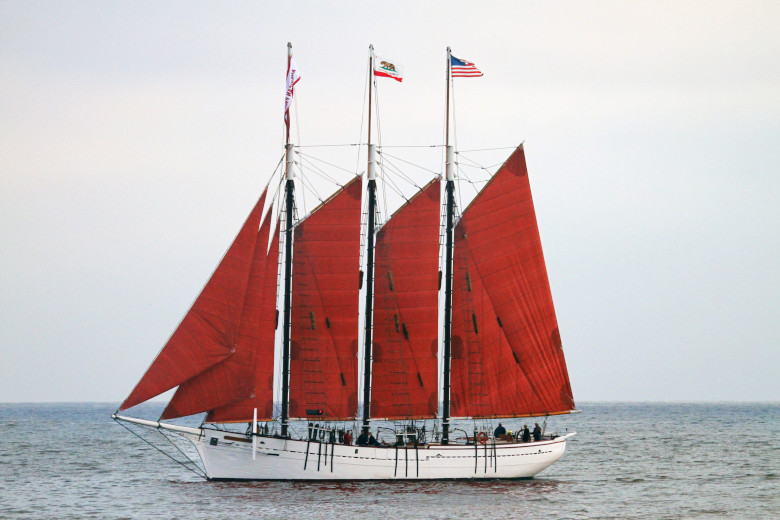 The American Pride is an older vessel with a few more days at sea and a few more tales to tell. Christened as the Virginia, she was built in 1941 at Muller Boat Works Inc. located in Brooklyn, New York as a two-masted eastern rigged trawler. The finest white oak available was used in her construction. She later became the Araho out of Rockland, Maine as part of the O’hara fishing fleet and then the St. Catherine, out of New Bedford, Massachusetts and Lady in Blue (1968-1986) out of Gloucester, Massachusetts captained by Sam and Paul Frontiero, father and son.  She spent her fishing career, of over forty years, fishing the waters of the Gulf of Maine, Georges Bank and the Grand Banks in search of cod, haddock, flounder and ocean perch.

Captain Steve Pagels took ownership in 1986 and  converted the trawler to a three masted schooner at the Wallace Yard in Thomaston, Maine. The vessel was fitted with 17 passenger cabins each with two bunks with a dining room and lounge in the main cabin, three heads and Forecastle accommodations for a crew of five. All of the refitting was achieved under the guidance of master boat builder David Short. In 1987 she was re-christened the Natalie Todd and sailed to her new homeport of Bar Harbor to sail as part of the Maine Windjammer Fleet.  As a reminder of how she looked when she was a working vessel Captain Pagels kept the Pilot house which contained the quarters for the captain and mate, he placed it in his back yard at his residence in Addison, Maine.

In October of 1996 she was purchased by the American Heritage Marine Institute (AHMI),  and began her historic 7,500 mile sail through the Panama Canal to her new home in Long Beach, California where she was operated by the Children’s Maritime Foundation. She served the youth of Long Beach for over 20 years.

In 2018 the Children’s Maritime Institute, a wholly owned division of Los Angeles Maritime Institute, took ownership of the American Pride and performed a modern stem to stern restoration so she can continue to provide educational programs for Long Beach. She received her US Coast Guard certifications in March of 2019 and has resumed her educational, summer camp and charter programs. 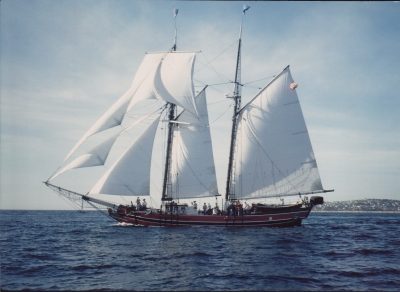 The TopSail Youth Program’s original vessel, Swift of Ipswich, was built in the style of a Revolutionary War privateer. She is a 70-foot wooden topsail schooner designed by Howard Chappelle and built in 1938 by William Robinson.

The Swift of Ipswich was once the personal yacht of actor James Cagney and had been a well-known floating landmark in California for over 60 years. Many who know her say her finest hours have been those spent serving youth.

About two thirds the size of one of our brigantines, Swift is especially well-suited for working with younger youth.

Our beloved Swift will be a sight to behold when she completes restoration in San Pedro and will be charged with serving upper elementary and middle school students in Wilmington. You can follow the excellent photo record of her reconstruction being created by Jerry Soto.

You can make a tax-deductible donation to the Swift of Ipswich restoration HERE.