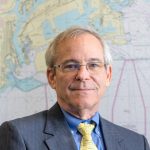 Bruce’s passion for the sea was ignited when his Dad and he built a 17’ windmill in their garage in Orange, Texas while he was in the first and second grade. Today he is passionate about using his experiences and the sea to help today’s youth understand the importance of STEM knowledge and encouraging them to have happy and productive lives.

He spent twenty-seven years with Motorola before joining the non-profit world. As a Vice President at Motorola he worked in Engineering, Manufacturing, Sales and Marketing, Strategic Planning, and Business Development and was based in both the US and Europe. With Bachelors and Master’s degrees in Electrical Engineering and an MBA he is well versed in both the technical and business challenges of running an organization. After retiring from Motorola in 2006 he joined the Ocean Institute in Dana Point, California where he learned many of the ropes of the tall ship world, first as volunteer coordinator and then as First Mate of Pilgrim and shipwright for both Spirit of Dana Point and Pilgrim. Before joining LAMI on 12/1/2013 he spent two years at the San Diego Maritime Museum as Project Manager in charge of building the tallship San Salvador, a replica of a 1542 Spanish Galleon. 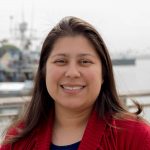 Anita is the lovely voice you hear when you call in, and handles everything for our crew, our passengers, our schools and students, and she is an amazing asset to her colleagues. She grew up in the city of Wilmington where she attended a private High School. She has the hobby of crafting and doing artsy things. She loves her two daughters and two sons, and they are her joy. She has been with the Institute since 2004. Her favorite color is red, favorite food is Italian, and dislikes rock music. 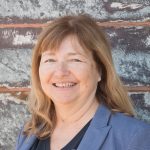 Alice is the Director of Development, Sales & Marketing for the Los Angeles Maritime Institute at the LA Waterfront in San Pedro. Besides her relentless pursuit of grant opportunities, she has a great job of selling sails on twin brigantine tall ships that sail practically every day out of the Port of LA. She came to be involved with the Maritime Institute through her grant writing work in San Pedro and Wilmington with the Harbor Community Benefit Foundation and other local non-profits after a long career with Hughes-GM-Boeing in market research and new business development. 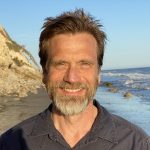 Initially joining LAMI as volunteer crew, Michael loves inviting others to share in the unique joy and discovery LAMI offers young people as LAMI’s Director of Development. Michael’s passion for the ocean is at the heart of his diverse professional experience and expertise, including marine science education and research, environmental conservation advocacy, nonprofit program directing, and nonprofit strategic development. At the age of 7, while growing up in Washington, DC, Michael’s main outlet to the outdoors was through learning how to sail with his Dad, with missteps being the best teacher! Michael fell in love with the ocean and has ever since made a life of learning from it and sharing it with others. Michael studied the ocean and its wildlife as a working scuba diver for NOAA and a Research Associate at the Marine Science Institute at the University of California, Santa Barbara. He lectured at UCSB in marine biology and taught marine science for Northeastern’s Three Seas Program in Jamaica and aboard a tall ship for Sea Education Association. Michael led marine science research in the Caribbean for UCSB and marine conservation advocacy as Director of Marine Programs for the nonprofit Santa Barbara Channelkeeper. He went on to support marine conservation as Executive Director of the Code Blue Foundation and was an independent consultant to business and nonprofit organizations on strategy and development. Michael holds a Master’s in Marine Ecology and Evolutionary Biology from UCSB, an MBA from Pepperdine University, and a Certificate in Social Entrepreneurship from Stanford University Graduate School of Business, Executive Program. Michael volunteers for the outdoor experiential program, Wilderness Youth Project, and loves snorkeling, surfing, sailing, and any chance to get salty and sandy with his family. 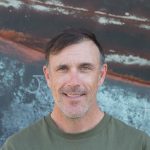 Captain John has worked with the Institute since 2007. John came up through the ranks starting down in Dana point on board the Brig Pilgrim cutting his teeth with Captain Doug Corey.
John started sailing tall ships in 1996 while he was in school, entertaining the idea of a teaching credential, like his 4 siblings. Tall ship sailing became a passion and the rest was history. John resides in an actual home in Huntington Beach with his wife and 3 children. There are a couch and a bathtub and a cat named Megalodon. Music gets played a lot in this house. Music about sailing. 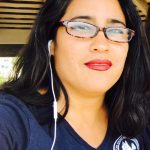 Milly La Roe started volunteering with us in 2015, along with her teenage son. After years of being a volunteer and youth crew mom, she has joined our team as volunteer coordinator. She loves the outdoors and going on long sailing trips. When not sailing tall ships or on her own boat, she is an accomplished singer and loves to cook. 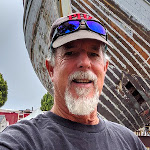 Ken has owned, operated and managed boat yards in Northern California Bay Area for 40+ years. Ken Has recently came to us from the Battleship USS Iowa, which he was the Operations Manager for 5 years. Ken is a third generation boatbuilder. His Grandfather, Dominic LaBruzzi came from Palermo Sicily in 1919 and built Monterrey fishing boats, trawlers and cabin cruisers in San Francisco Fisherman’s Wharf and in Oakland Estuary with Ken’s Father Lawrence LaBruzzi. In 1980 Ken became partners with Lawrence at Harbor Boat Repair in San Rafael, Ca. Ken brings to us proven management skills, systems installation and propulsion design, and installation expertise. Ken was a big part of the research and development team of the Arneson Surface Drives in the early 80s. 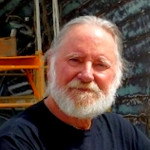 Jamie has worked in the traditional rigging and square-rig sail training since the early 1980s and built an extensive knowledge of traditional sailing ships. He has sailed over 30,000 miles as bosun, mate, or master on many square-rigged & traditional vessels including: HMAV Bounty, 1877 barque Elissa, topsail schooner Californian, galleon Golden Hinde, barque Star of India, brig Pilgrim, square-topsail ketch Hawaiian Chieftain, brig Lady Washington, brigantine Soren Larsen among many others. He served as Chief/Master Rigger on the 1896 barque Glenlee, the 1905 barque Moshulu, the 1886 ship Balclutha and spent 2016 supervising and directing the $3.5 million rigging restoration of the largest wrought iron sailing ship in the world, the full rigged ship Wavertree, launched 1885. Jamie crossed the Equator three times under square-rig and had the good fortune of working on several Hollywood movies as a consultant, sailor, or rigger, including two Pirates of the Caribbean films.

This page would not be complete without a moment of recognition for all of our great volunteers that contribute so much of their precious time and energy. Our volunteers help us everywhere from the boat yard all the way out to sea. Thank you volunteers!