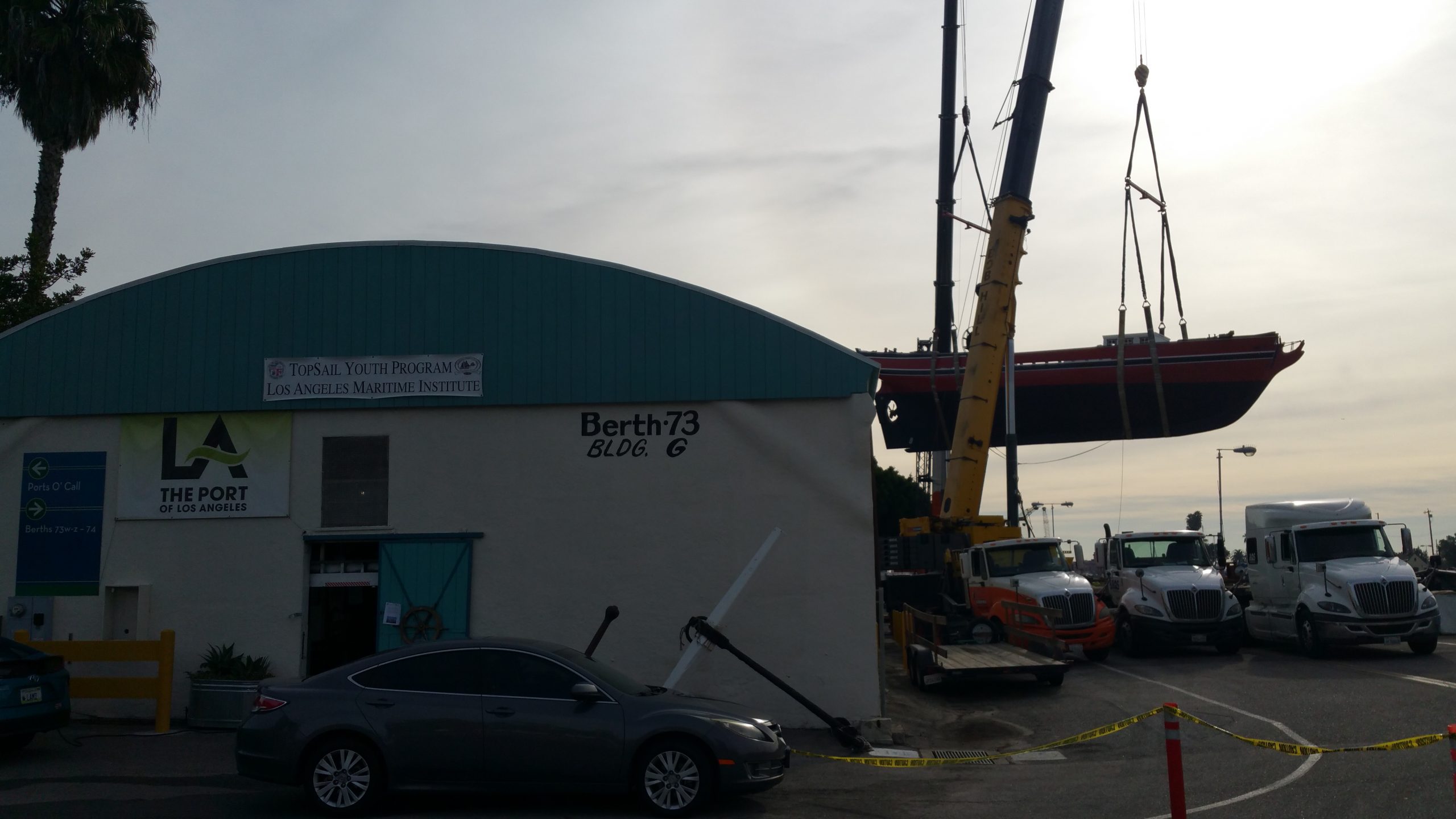 Swift of Ipswich is Back in the Water

About a week before that crisp, damp Friday morning, December 6th, 2018, the final trunnel was hammered into the hull of the Swift of Ipswich. The last thru-hull was inspected, the new bottom paint dark as a starless night, her topside red and yellow as the sunrise, every hull plank and keel bolt longing for one thing: the feel of the sea again.

The time had come. After years of reconstruction work in the boat yard at Building G, it was time for the next leg in the history of  journeys of the Swift of Ipswich. Though she would be traveling only a few hundred yards today, and not under sail, it was an important day. Ships belong in the ocean after all.

Once the LAMI crew gathered that morning, most starry eyed, most unable to sleep the night before from excitement and anticipation, an engine starts up; cranes extend their reach. Peering from under the hard hats at the top of the crane tested one’s comfort, mostly because they are immensely tall, but also because our ship was about to hang, suspended by straps, cables and chain, from those lofty heights. Ships don’t belong in the air after all.

Then, like a symphony, two maestro work their levers, their batons conducting the orchestra below. Soon a ship is in the air, the hull that we have walked around and around suddenly looking small. And as gently as if she were hove to, over the fence, over the storage containers, over a street. Over the dock. Over the water, she stops. Hold.

If you are familiar with LAMI, you may know how much effort and work has been put into this moment. Literally blood, sweat and tears of countless shipwrights, crew members, captains, volunteers, carpenters, plumbers, welders have gone into this moment. Today she is a mastless ship, tomorrow she is a new floating classroom for thousands of children in Wilmington.

The crowd gathered. Across the cut the Swift of Ipswich dozed in her sling. We took a moment to recognize those that made this day possible, and let them say in their own words how much they believe in our programs. They may not know it, but their kind words and support are the wind in our sails. We can never thank you enough.

The speeches were spoken. There was only one thing left to say. Our Executive Director Bruce Heyman passed the microphone to co-founder Alice Robinson, and she gave the order: “Lower away!” Engines whirred, the ship stirred.

Closer and closer to mother ocean, the sea’s reflected rays dancing on her hull, the Swift of Ipswich inches back to earth, only this time in a more suitable, ocean-covered part of it. There will be nothing under her keel except water, nothing holding her upright save her own design, she is now free to move about the world. Ships belong in the ocean after all.

The rest of that morning is in the photos below for those of you that could not join us on that magical day.

The story doesn’t end here. That day was a major milestone for the Swift of Ipswich restoration, but not her final milestone. The Coast Guard has learned a few things since our ship was built, and there are new requirements we have to meet to keep our 18th century ships sailing in a 21st century environment. We need new masts, yards, booms and gaffs that all meet new weight-aloft requirements. The fun is just beginning. Wouldn’t this be a great volunteer project? Wouldn’t this be a good cause to donate to? 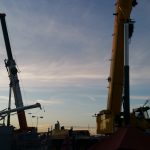 Cranes gather the morning we splashed the Swift of Ipswich in 2019. 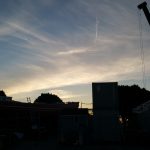 The Swift of Ipswich, her last morning in the yard. 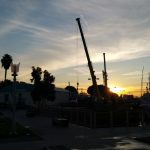 Cranes are preparing to fetch up the Swift of Ipswich. 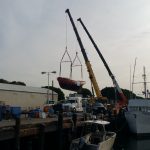 The Swift of Ipswich is, well, aloft! 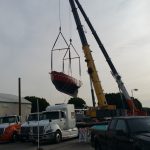 Part one of the amazing dance the crane operators did. 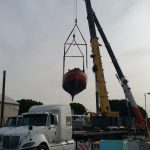 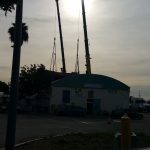 I’ve seen a sunrise, moon rise, but not every day you see a boatrise! 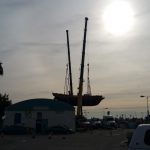 Little bit of photoshop here, we can remove those cranes right? 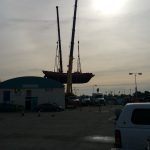 I still don’t know how they did this part. 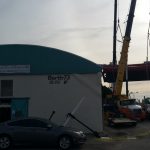 You wouldn’t believe the amount of work we do in this building. 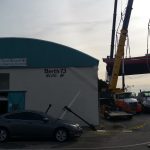 So much work in this building, we need two cranes to move it. 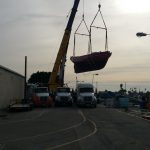 This is what you get when you park your ship and don’t feed the meter. 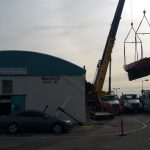 I wish it looked like this every day. Our ops manager probably doesn’t. 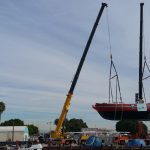 Swift of Ipswich showing off her new hull. 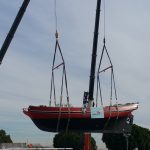 Swift of Ipswich was once the private yacht of actor James Cagney. 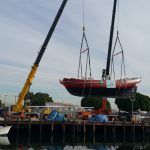 So close to the water. 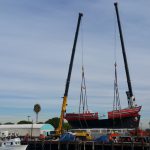 I didn’t try to line this up. our crane operators are that good. 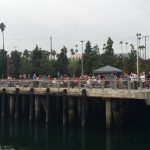 The crowd awaits the Swift of Ipswich launch. 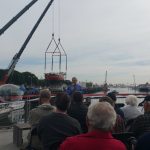 Bruce Heyman, Executive Director, giving a background on what it took to get to today. 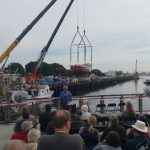 Bruce Heyman, Executive Director, thanking our sponsors for their support. 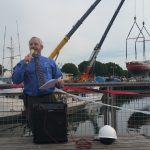 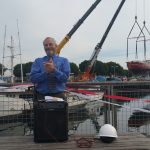 Bruce Heyman, Executive Director, Los Angeles Maritime Institute at the launch of the Swift of Ipswich. 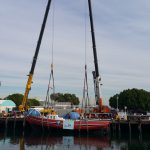 The Swift of Ipswich returns to the sea. 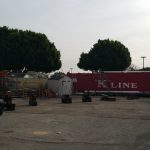 Ok, bring in the next one!